The 2018 General Assembly Session has concluded and I want to provide an update on what happened in Richmond last week.

SB 966, which is identical to HB 1558, has been signed by the Governor. SB 966 contains the pilot program that guarantees the proposed Haymarket power lines are buried. This is great news for western Prince William residents who have consistently stated that the I-66/Hybrid route is the only acceptable option for new power lines.

As I mentioned last week, my HB 1539 was included in a conference committee of Senators and Delegates. I am happy to report that a bipartisan agreement has been reached to increase funding and implement necessary reforms to Metro. We were able to meet Virginia’s full funding goal without raising taxes. The funding is tied to key reforms like cost-reduction measures, better oversight, and WMATA Board governance. Virginia’s funding is contingent on Maryland and D.C. meeting their regional obligations for Metro.

My HB1241 has passed both the House and Senate and is awaiting the Governor’s signature. Currently, various localities restrict non-profit organizations such as local sports teams and clubs from holding car wash fundraisers. This will allow groups to hold a car wash with biodegradable soaps to lessen the environmental impact. I want to thank Supervisor Pat Herrity (R-Springfield) for bringing forward this commonsense solution.

The General Assembly adjourned without an agreement on a new two-year state budget. While we have until the end of June to pass a new budget, discussions are already underway working to find common ground and the Governor has called the General Assembly back to Richmond for an April 11th Special Session. I am confident that we will have a bipartisan budget worked out prior to the June 30th deadline.

During the last week of Session we didn’t have many visitors, but I want to recognize an impressive young woman. Nadia Elgendy was outstanding to work with and a tremendous addition to my office this session. Nadia’s skill set and professionalism will undoubtedly ensure her success with future endeavors. 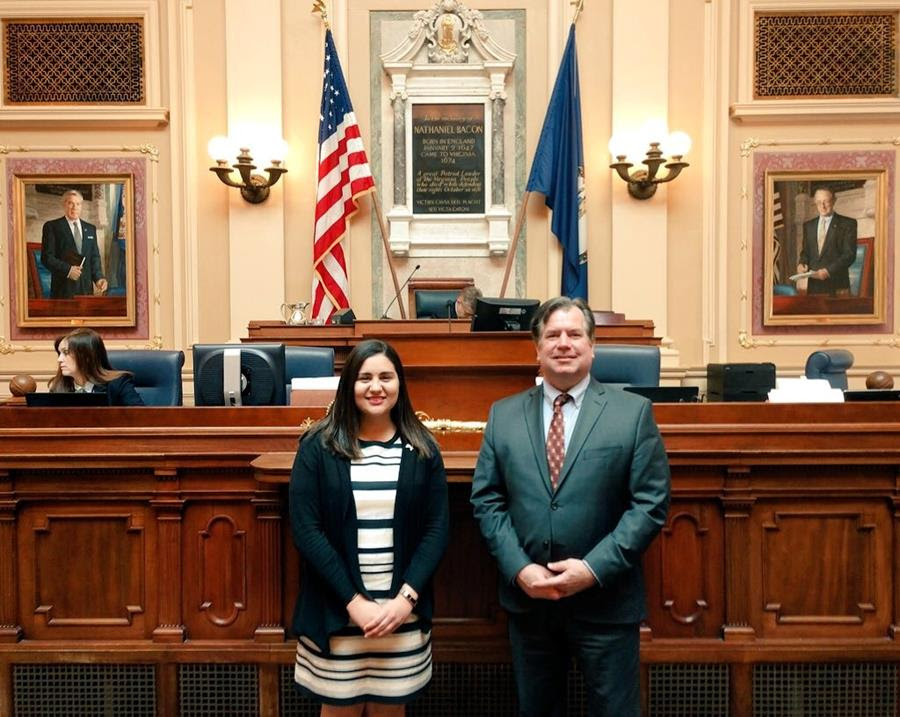 Nadia and me on the House floor on her last day

Indeed, the sweeping legislation included far more than just changes to utility rates. Del. Tim Hugo, R-40th District, managed to include language in the bill to appease his constituents in western Prince William County, who have spent years fighting a planned Dominion power line set to stretch through parts of Gainesville and Haymarket.

The final bill says Metro would get the money only if it meets requirements to improve governance and financial management. Virginia would withhold 35 percent of the new money if Metro asks for more than a 3 percent annual increase in the state’s subsidy of the transit system’s operating budget. The bill also would streamline Metro’s board of directors by reducing the role of nonvoting members.

“The reforms were included to ensure that the problems that Metro has experienced over the last decade do not reoccur,” Del. Timothy D. Hugo (R-Fairfax), one of the bill’s sponsors, said.